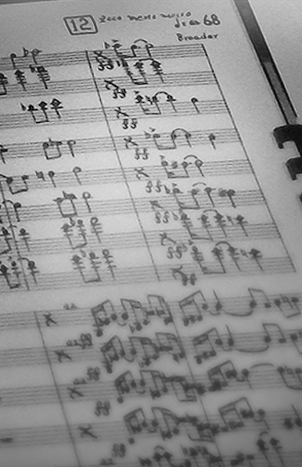 Louis Angelini is a native of Utica, New York, a city known for its rich cultural diversity. His music is primarily centrist, appealing to broad audiences. He has also created some works of a specialized nature which are of interest to smaller audiences. In a general sense, the range of musical language and approaches he has used parallels the cultural diversity he experienced in his home town.

He began his musical studies privately and in the city’s schools. He received a B.M. degree with a major in theory from Ithaca College and also studied at Cornell University. This was followed by graduate work at the Eastman School of Music of the University of Rochester where he received a Ph.D. in composition and an M.M. in theory. At Eastman he held a graduate assistantship in orchestration. He studied conducting with Pierre Monteux at the Domaine School for Conductors, and composition at Tanglewood, at the Berkshire Music Center, where he was awarded the Koussevitzky Prize in composition. He then went on to work in Italy under a Fulbright Fellowship in composition. His most significant mentors were Bernard Rogers, Witold Lutoslawski and Lucas Foss.

Angelini taught at East Texas State University, then for two years was a composer-in-residence with the Lincoln, Nebraska, school system through a fellowship from the Ford Foundation and the Contemporary Music Project. He received several grants from Meet the Composer, sponsored by the New York State Council for the Arts. He taught at Utica College of Syracuse University, presently an independent college, where he received the Distinguished Teaching Award and served as coordinator for Performing and Fine Arts.

His compositions include solos and duos for instruments and voices, chamber music, choral works, structured improvisation plans, music theater works and orchestral music. His music has been performed by American and European professional organizations, college, school and community ensembles, including radio and television performances. Some of his works have been published by the Contemporary Music Project.

Performers and organizations presenting his music include flutist Bonita Boyd, artist-teacher at the Eastman School of Music, the Utica Symphony Orchestra, the Utica College multi-media and music theater ensembles, Nuova Consonanza in Rome, Italy, the Amici String Quartet, Steven Heyman, artist-in-residence at Colgate University and faculty member of the School of Music at Syracuse University, the Madison String Quartet, the Players Theater of Utica, the Society for New Music and the Eastman Wind Ensemble.